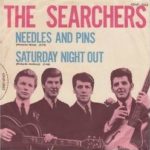 The Searchers Needles And Pins are one of my favourite Merseybeat songs. Why? Because it have a very typical sound for this period among the bands from Liverpool. And also the song has a text about how difficult love can be – hurting like needles and pins and you have to hide you tears because of you pride. Simple but very effective I think. As it often was in the 1960s this hit was a cover version originally performed by Jackie De Shannon.

Needles An Pins by The Searchers can be found on the album It’s The Searchers but I have it on a compilation album which is a view into the sound of Merseybeat in the early 1960s.

See them perform in the famous Ed Sullivan Show below.